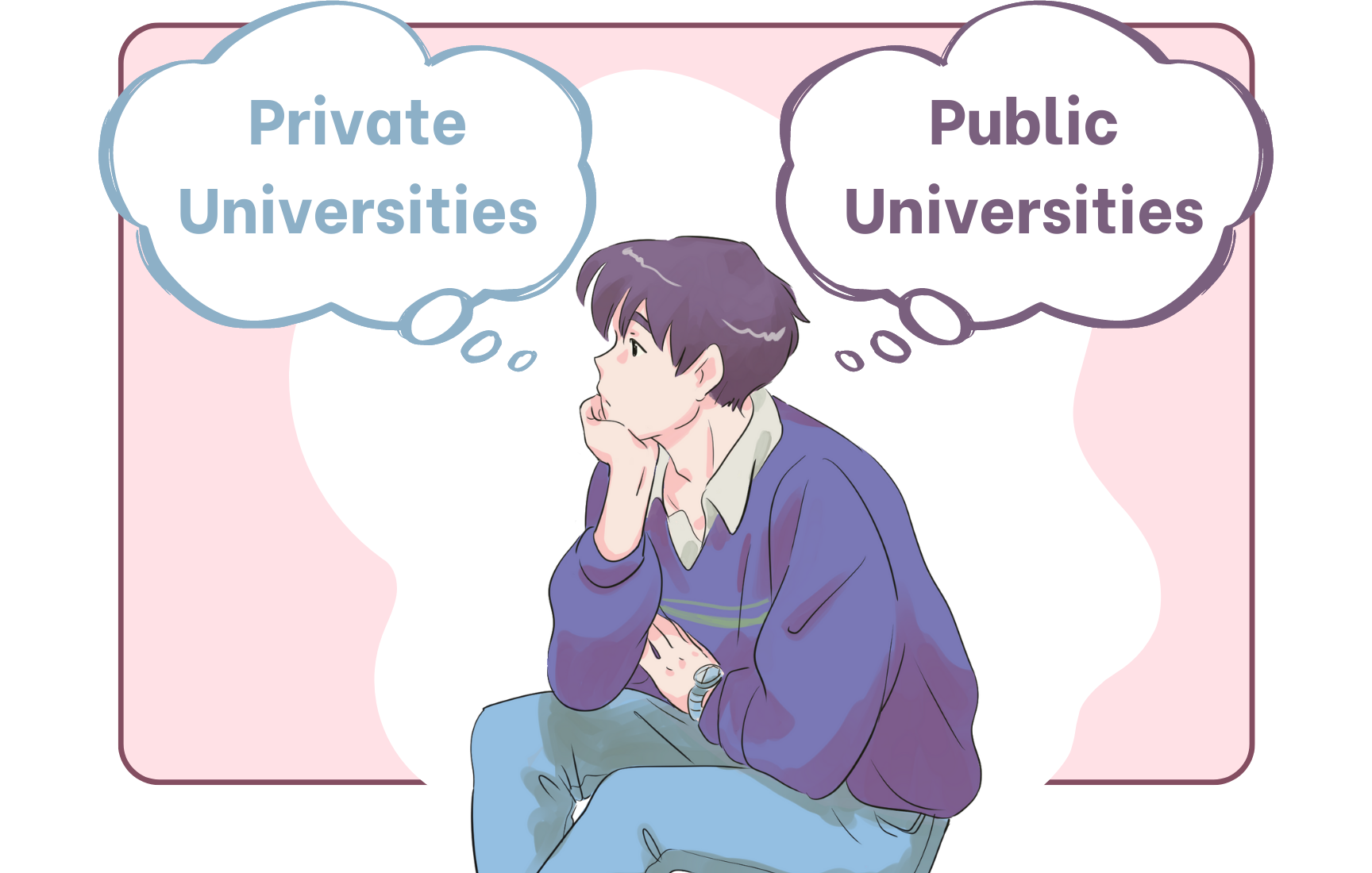 With the school year beginning for many students across the nation, high school seniors will be faced with the daunting task of applying to college. One of the decisions these students need to make is whether to apply to private or public universities. While most students apply to both kinds of school, it is important for students and parents to fully understand the differences between these models to make the choice that works the best for them. For example, students who are interested in art may assume that a prestigious art school is the only choice they have for college without realizing that many public universities also have robust, accredited art programs.

As we discuss the differences between private and public universities, it is important to note that there is always an exception to the rule. This article is meant to be a general overview of the subject. It is also important to note for students interested in attending historically black colleges and universities (HBCUs) that there are private and public HBCUs. This article also focuses only on four year universities, but there are a variety of ways to pursue a post-secondary education through community colleges, trade schools, or apprenticeships. Always research an university you plan on applying to and discuss its educational opportunities and financial investment with your family.


Sources for any cited data will be linked in the text & listed for reference at the end of the article.

A private university is an educational institution that is privately funded by donations and tuition. What this means for students is that private universities tend to be more specialized and individual than their public counterparts. For example, private universities can have religious affiliations, like Brigham Young University (BYU) in Utah which is sponsored by the Church of Jesus Christ of Latter-day Saints. Specialty universities are also largely private institutions. Some notable examples are liberal arts schools like Scripps College, art schools like Art Center, and other universities that focus on a narrow range of subjects like the California Institute of Technology (Caltech). Students who are interested in a specialized discipline may find that they have more opportunities for intensive, specialized study at one of these universities.

Private universities typically have smaller classrooms which result in a closer knit student body and stronger relationships with professors. This can provide students with early networking opportunities, especially if they are attending a specialty college or university closely related to their future career. For example, a student who works closely with an instructor may use that connection as an “in” to obtain an internship. Or, a student can find work opportunities after graduation through strong alumni networks. Smaller class sizes also mean that it is more likely that an instructor will be able to provide personalized feedback and assistance to students who are struggling.

In addition to smaller classes, many private universities also have a much smaller student population. For example, Pitzer College – a private liberal arts college in Claremont, CA – has just over 1,000 degree-seeking students attending (meaning this number accounts for both undergraduate and postgraduate students)[1]. Meanwhile, the nearby CalPoly Pomona – a public university affiliated with the California State University system – had nearly 27,000 undergraduate students alone as of Fall 2021 [2]. But this small class size comes at a cost: Pitzer College and other specialized private universities can be extremely selective in their admissions. The group of private colleges that Pitzer belongs to (the Claremont Colleges or “the 5Cs”) in particular are known to be extremely selective, with Scripps College having the highest acceptance rate at approximately 32% in Fall 2020 [3] and Pomona College having the lowest, accepting only about 7% of applicants in 2020 [4].

While there are many private universities that are less exclusive than the Claremont Colleges or the Ivy League Universities, students and parents should take care to consider the available admissions data for any university they are interested in applying to.

Private universities are also usually more expensive. Because the costs of running the university comes directly from tuition, their up-front costs can be almost twice as expensive as their public university counter-parts. For example, two of the best universities in California are the University of California Los Angeles (UCLA), which is public, and the University of Southern California (USC), which is private. While basic tuition at UCLA is $13,408 per year for an undergraduate who is a resident of California, it is $63,468 per year at USC. Even after factoring in the additional cost estimates on each of their websites, a California resident attending UCLA will pay between $29,000 ~ $37,000 per year while the same student attending USC will pay $75,000 ~ $85,000 per year (without financial aid). [5] [6]

Private universities’ strengths lie in their ability to offer specialized and individualized education but are hindered by their higher tuition costs and generally lower admission rates.

A public university is an educational institution that is funded by the state government. Because of this, public university policies and funding vary from state-to-state. So, for clarification, this article will focus on public universities in California. These universities must also adhere to certain social guidelines like having no explicit religious affiliation, much like a public primary or secondary school. While public universities tend to offer a wider range of majors and classes compared to private schools, they can still be specialized or renowned for their expertise in certain subjects. For example, the University of California, Davis is ranked as the top university in the nation for agriculture and veterinary studies [7] while San Jose State University’s Animation & Illustration BFA (Bachelor in Fine Arts) program is regarded as one of the best in the nation [8].

Public universities tend to have larger classrooms and student populations compared to their private counterparts. While it is inaccurate to say that public schools cannot be exclusive – the University of California, Berkeley, one of the best universities in the UC system, accepted just 11% of its Fall 2022 freshmen applicants [9] – many exist as a more accessible way to obtain a higher education. The California State Universities, for instance, enrolls approximately 470,000 to 480,000 students a year throughout the state across their 23 campuses [10].

However, the larger classroom size in many public universities means that students often do not get the same level of individualized attention from their professors compared to private universities. Popular introductory classes can reach up to 300 students in one lecture hall. This means that students are rarely able to speak one-on-one with the professor and discussion classes are led by teaching assistants (TAs). However, depending on a student’s major and focus, public university classes can be just as small as those offered by private colleges. For example, it is not uncommon for upper division classes in more niche majors like anthropology to only have between ten to twenty students. It is also important to note that because of the larger number of students, popular majors with limited class availability and resources can be “capped,” meaning that only a certain number of students will be admitted into the major per year.


If private universities’ strength lies in their specialization, public universities’ strength is in their variety. That is not to say that private universities offer less majors and minors. But public universities offer so many things to study that students can explore a variety of educational paths. A student who fails to enter a capped major may find an unexpected opportunity in an entirely different field. Another example to help illustrate this to imagine a high school student who is interested in animation. This student may apply to a private university focused on art like Art Center College of Design and a public university that offers a major in animation like California State University, Long Beach (CSULB). Putting aside any budgetary concerns, both universities offer highly regarded courses in animation. Art Center offers 11 majors, with animation offered as a track within their “Entertainment Design” major [11]. In comparison, CSULB offers 90 majors, including their Bachelor of Fine Arts program which offers a focus on animation [12] [13]. Herein lies the difference between these schools – a student who enrolls in Art Center only has the chance to explore classes related to art. A student at CSULB can take classes in a wide variety of subjects from marine biology to ethnic studies to finance. Our country’s school system makes it easy to forget that students choose their colleges and majors when they are still very young. And while many students end up pursuing their lifelong passion after graduation, many also fall out of love with their first choice of major or never loved it in the first place. A public university offers students the freedom to explore and find what subjects they click with before they are “locked” into a major.

One key advantage of public universities is their tuition costs. In particular, the UC and CSU system offer lower tuition for students whose parents are residents of California. By living in the state, their taxes go directly into funding these universities and their tuition reflects this contribution to the state economy. This is why out-of-state students see such a dramatic change in tuition costs compared to their Californian peers. While this limits admission viability for out-of-state students, it helps make public universities more affordable for state residents, especially if they are able to obtain additional financial assistance through grants and scholarships. It is important to note, however, that many students still struggle through paying for their education, and financial aid programs range from school to school and state to state.


Public universities’ strengths lie in their comparable affordability and wide range of opportunities, while they are hindered by their large size and finite resources.

There are impassioned arguments on both sides whether private or public universities are more beneficial for students. Both have positive and negative aspects, so it is irresponsible to claim that one is “better” than the other. Hopefully, this article provides enough information that students and their families can make a better informed decision as college application season looms ahead in the upcoming months.