All About Speech & Debate 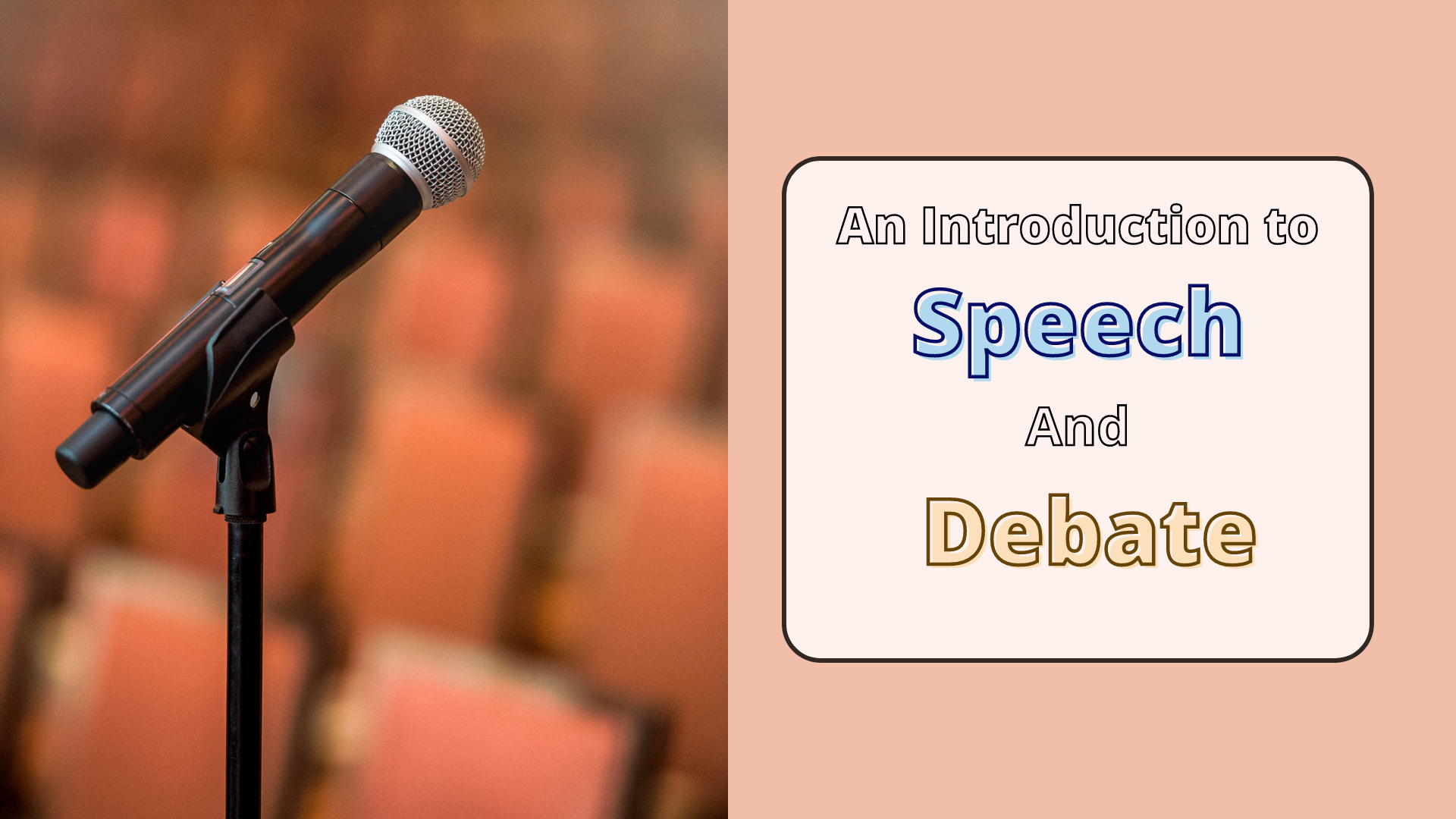 When a person enters Honor Academy, it’s hard to ignore the table of trophies in front of the door. They range from medals to small plaques to golden cups. Not far from this table is a wall with three pin-boards covered corner to corner with polaroids. In these pictures, students hold their awards while smiling triumphantly at the camera. It’s hard not to ask what all of it is for.

Forensics – the collective term for speech and debate – are overseen in the United States by the National Speech & Debate Association (NSDA). With a NSDA membership, schools and other educational institutions can enter their students in competitions across the country. The NSDA  “connects, supports, and inspires a diverse community committed to empowering students through speech and debate” [1].

But the world of forensics can be overwhelming for someone that’s just starting out. Even choosing what event to participate in can feel paralyzing. This article hopes to provide parents and students with some basic information about forensics and why so many institutions, including Honor Academy, believe it creates a lasting positive impact on students. We also encourage those that are interested in participating in forensics to visit the NSDA’s official website to learn more.

The Difference Between Speech & Debate 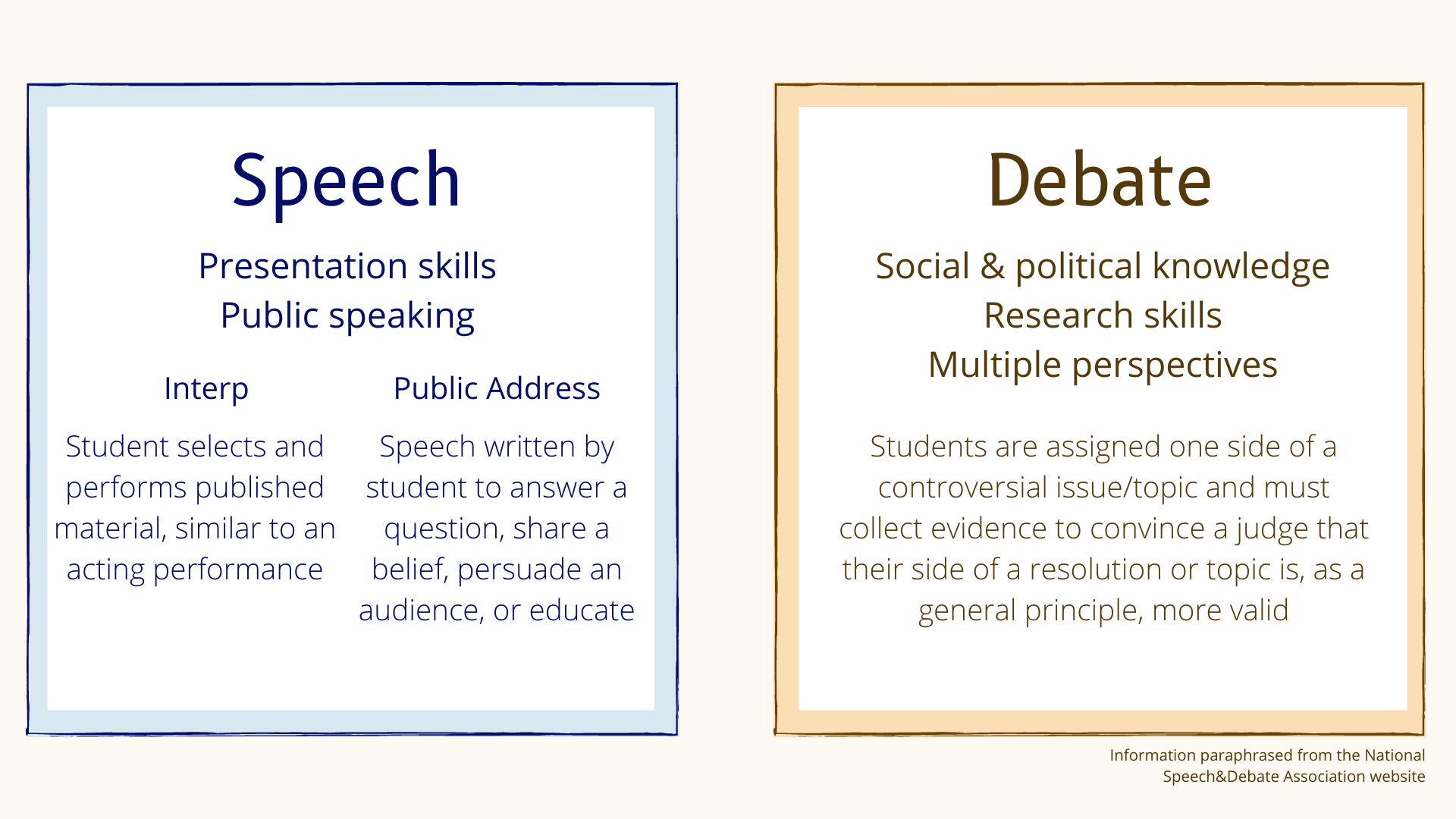 Although speech and debate are two separate competitions, it can be easy to confuse or conflate them. It doesn’t help that they’re often talked about like they’re a singular subject. But understanding the differences between speech and debate is the first step in deciding which event will fit best with your student. 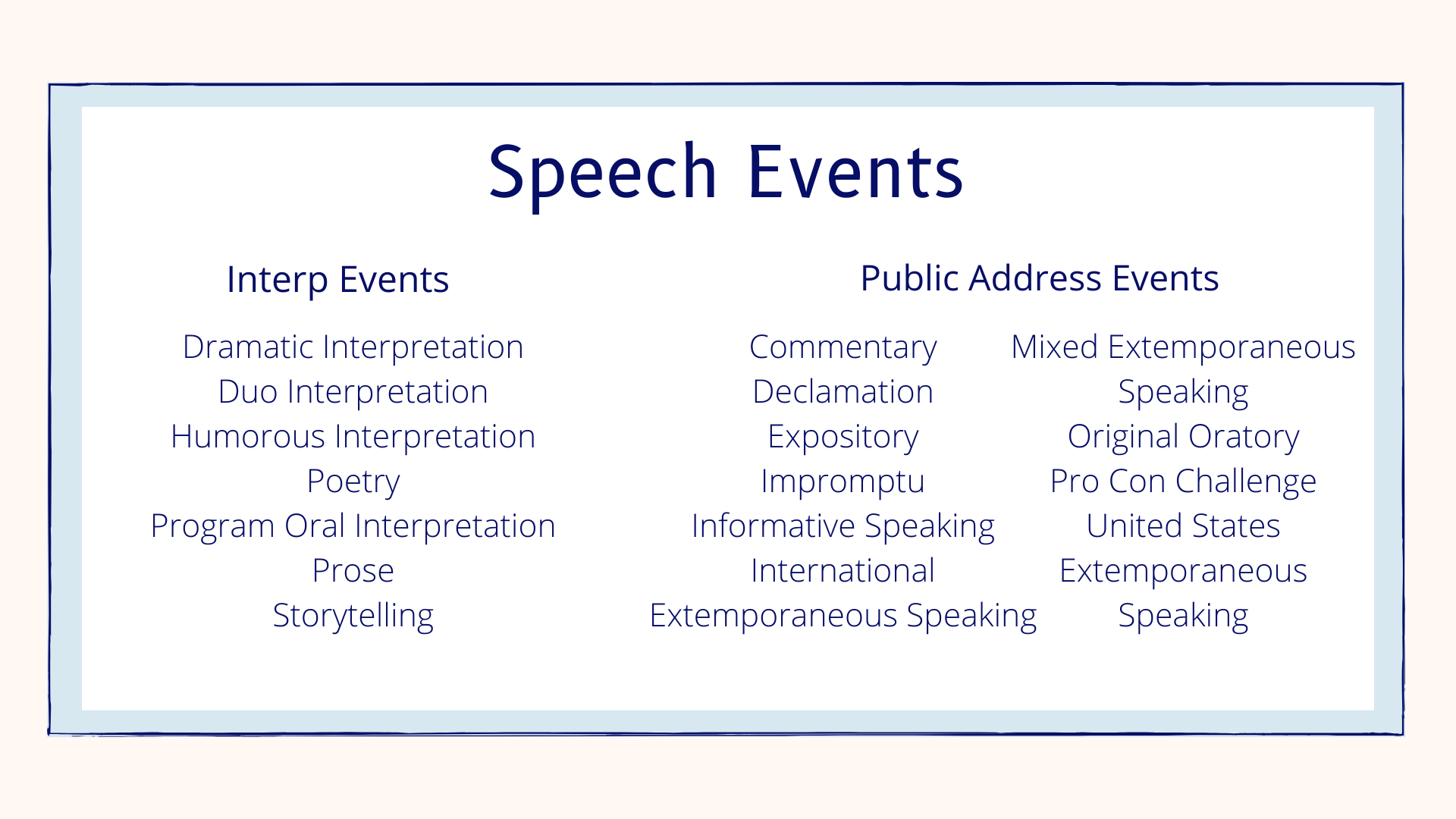 While the purpose of speech is to clearly present the speaker’s ideas, any orator will tell you that the power of your words aren’t enough to stand out. On the stage, everything from a speaker’s tone to how they stand will be judged.

There are two kinds of speech events: interpretation (or “interp”) and public address. In interp events, students perform a published work like an excerpt from a novel, a poem, or a television skit. Like the name suggests, the student’s performance is meant to show their audience how they interpreted the chosen text just like how an actor might with a script. Watching an interp event is like watching a monologue – one student (or two in a duo interpretation) will use their voice and body to convey the scene to the judges.

Public address events are when students write and deliver their own speeches. These speeches should answer a question, share a belief, persuade, or educate the audience. Depending on what kind of public address event a student chooses to participate in, speeches are prepared beforehand or written on the spot. While public address might be less theatrical than interp, the students are just as scrutinized on the stage. 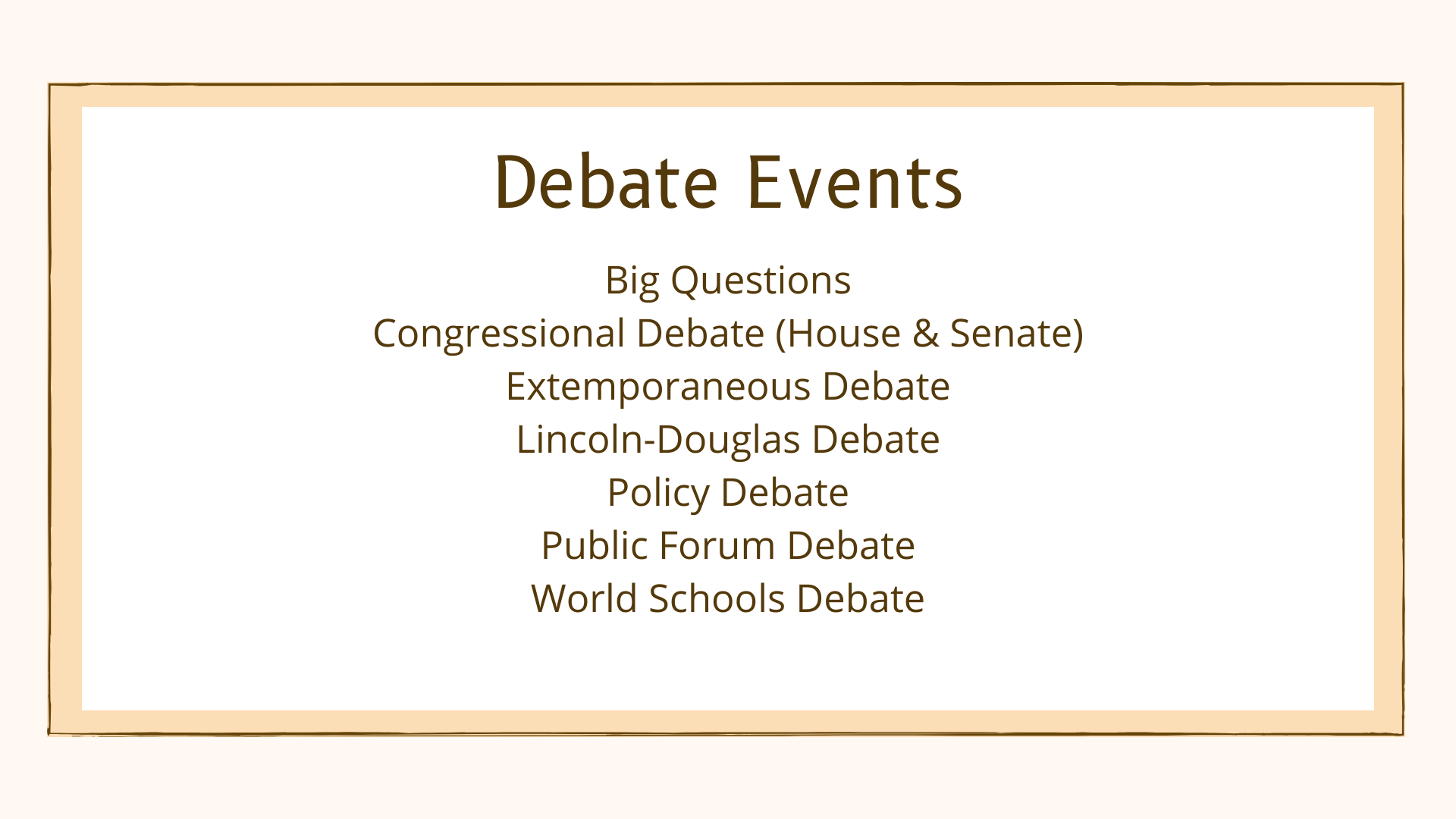 In debate, students must try to convince a judge that their side of a topic is more valid. There are many styles of debate within the event, each with their own rules and styles of argument. To be successful in debate, students need to look at the topic from all sides and be prepared to argue from any point of view. Because of this, students are exposed to topics and ideas that may be outside of their comfort zone. This makes students more knowledgeable about a variety of sociopolitical issues and helps them develop a nuanced way of looking at the world.

One important thing to understand about debate is that it is never about who is “right.” Moral righteousness cannot win a student a debate. To do well in debate, students must use evidence to support their claim and prepare rebuttals for the opposition’s counter-arguments. It trains students to think critically about topics from different points of view. Students learn not to think in black and white. The winner of a debate is likely the student who is able to keep an eye on the bigger picture instead of focusing too much on their own perspective. In his 2011 essay “Debate: Important for Everyone,” Alfred C. Snider, an advocate for forensics to be taught around the world, wrote that “debate provides the potential for independent vigorous free thought and dialogue… its process requires active thinking” [2].

The Power of Forensics

In an increasingly competitive academic landscape, forensics is uniquely equipped to give students an advantage both inside and outside the classroom. The front page of the NSDA’s website claims that students enrolled in the NSDA are attending the country’s top university at higher rates than the national average based off of 2019 fall enrollment data and a survey of over 6,000 NSDA students [3]. In addition, forensics equips students with skills that can be used across a variety of college majors including but not limited to: politics, theater, law, the humanities, and English.

However, above all, students who participate in forensics become more informed participants in a world that can be confusing, chaotic, and complicated. Snider wrote in his article:

“A democracy cannot just be a form of government; it must also be a state of mind… if your voters are passive, accepting and lack critical thinking capacities and abilities to speak out, we will have more of the same… I believe that we can greatly improve all of our societies by raising up a generation of debaters to become a new generation of citizens.”

That is not to say that forensics is a paradise of pure academic discourse – it, like any other institution, suffers from the ramifications of society’s larger issues of racial, financial, and gender inequality. Many, many schools do not have established forensics clubs which means students must seek a third-party to participate in competitions. This not only limits the amount of students who know that forensics exists, but also creates a potential financial barrier for those who want to get started. That is why individuals like Snider advocate for forensics to take a larger role in shaping our nation’s educational policies.

We have been providing debate classes at Honor Academy for many years and introduced speech into our program in 2017. Our students regularly attend tournaments across Southern California and some have even traveled outside the state to compete. We encourage our students to attend one tournament a month to keep their skills sharp and learn from their competitors. While students will not be able to compete in official tournaments until they are in middle school, Honor Academy also offers forensics classes at the elementary school level so that students are competition ready as soon as possible.

Honor Academy’s focus is always on the students first – education should work for the student, not against them. A key part of our pedagogy is making sure that students are always critically engaged with what they are studying. We believe that education is more than reciting information to a student who sits and passively listens. Forensics pushes our students to think creatively and critically about the world around them. It encourages them to speak their mind and look at different points of view. That is why Honor Academy continues to offer students a chance to take part in forensics. We know that it has life-long benefits and gives our students the skills to succeed well beyond their time with us.

Our site uses cookies to enhance the viewing experience. By continuing to browse our site, you agree to our Privacy Policy.I Accept